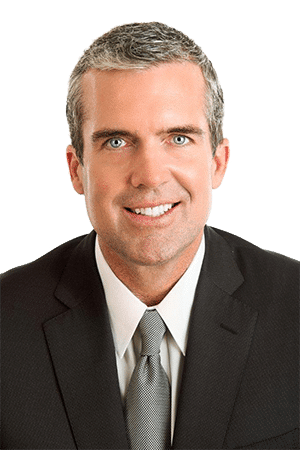 Eric Traut distinguished himself early as one of the top trial attorneys in Southern California when he was recognized as the youngest winner of the prestigious Trial Lawyer of the Year award in the history of the Orange County Trial Lawyer Association.

He has been selected by his peers to the list of Super Lawyers, including the “Top 50 Orange County” and “Top 100 Southern California” lists that featured him in Los Angeles Magazine consecutively from 2005 to the present. Eric has handled high-profile cases that have resulted in appearances on Good Morning America, Fox News, Court T.V., and ABC’s “Primetime.” Eric was the youngest member ever admitted to the American Board of Trial Advocates (ABOTA) at the age of 33, and he served as President of the Orange County Chapter of ABOTA in 2010. Presently, he serves as the President of the Orange County Bar Foundation, a non-profit organization strengthening Orange County youth and families through unique, award-winning health and education programs. In 2008, he was named as Alumni of the Year at Western State University Law School, and was inducted in the school’s “Hall of Fame” in 2013. He is a recipient to the Angelo Palmieri Award for Civility from the Banyard Inn of Court and was the first lawyer to be awarded the OC Look award by Orange Coast Magazine, an award given to those individuals who exemplify success and style in Orange County. Eric has been a speaker at countless seminars on litigation and trial skills, and published multiple articles on strategy and practice.